Habitat: The most common type, subterranean termites, cause 95% of all termite damage in North America. Found in every state except Alaska, termites are most prevalent in the South; the so-called termite belt stretches across the Southeast from Virginia to Texas.

Clues: You can locate an infestation by poking wood with a screwdriver; if the tip goes in easily or you hear a hollow sound when you tap the wood with the handle, you might have a problem.

Be looking out for for a thin gritty gray-brown film on the surface of damaged material. Also look for narrow mud tubes on both the interior and exterior of your walls and foundation. Termites travel though these tubes between their colony below the ground and their dinner above—your home.

The one time they come out in the open is when they swarm. Swarms consist of flying “reproductives” that leave the colony, mainly in spring, to mate and start new colonies. You may not spot the swarm itself because the love bugs shed their wings and head underground within a few hours.

Instead, look for discarded wings that resemble fish scales. Swarms can emerge indoors or outdoors. Evidence of an indoor swarm, such as discarded wings or the corpses of termites that couldn’t find a way out, is a sure sign your home is infested. 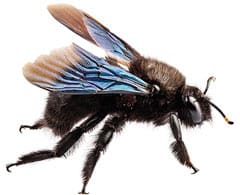 Habitat: Common in all regions, carpenter bees burrow into wood—preferably unfinished—to make nests. They drill almost perfectly round entry holes about 1 to 2 inches in diameter that lead to tunnels where they lay their eggs.

Clues: Look for them hovering near eaves, decks, and siding.

Most likely to damage: Carpenter bees are less likely to cause serious structural damage than termites or carpenter ants. However, their entry holes can allow moisture to enter the wood. 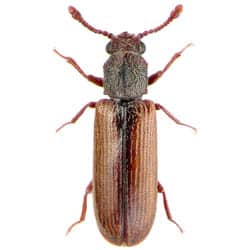 Habitat: These wood-boring beetles lay their eggs in cracks, crevices, and wood pores. The hatching larvae then feed on the wood. Present in all regions.

Clues: Look for powdery deposits of frass and pinhead-size holes made by adult beetles exiting the wood. The peak time for beetles to emerge is May through August.

Most likely to damage:Anobiid powderpost beetles attack softwood species such as spruce, pine, and fir that are commonly used to make floor joists, wall studs, and other structural lumber, according to the North Carolina Cooperative Extension.

Lyctid powderpost beetles attack only hardwoods, such as oak, ash, hickory, and maple used in furniture, cabinets, wooden floors, and some interior moldings/trim. 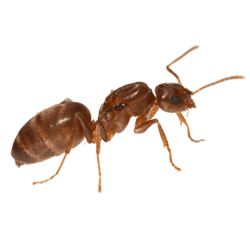 Habitat: Carpenter ants bore into damp and decayed wood to make nests. Most common in northern states, these pests forage through your home, mostly at night, looking for water and food. They’ll eat just about anything people do and are especially fond of sweets, fat, and protein.

Clues: Look for swarmers in the spring and for piles of frass—a mixture of wood shavings and fecal matter. Rustling sounds may indicate a nest.

Bug- X Is The Best Solution.

We are professionals in our field. In fact we are good enough to train Termite Inspectors ourselves in our school division at Builder’s Academy, Inc. We are not trying to get a pest control contract from you, so you get an unbiased factual report. You get a report that will be accepted by lending institutions, mortgage companies, and real estate companies. You get BUG-X on your side.

Call 281-558-4100 or use the contact form on this website. We want to answer your questions and concerns. We look forward to being of service.